a beautiful example of wall painting from the Middle Ages 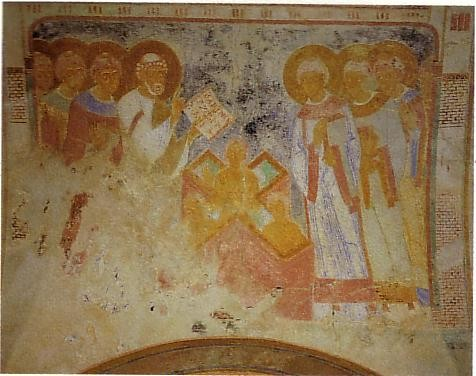 The old church in Idensen was built under the order of Bishop Sigward of Minden, who died in 1140, as his own, probably intended for his burial. The well travelled, experienced constructor belonged to the close circle of friends of the Emperor Lothar III.

The church was built out of carefully formed sandstone blocks. The simple building contains a West Tower. The inner room is much more elaborate. The nave is divided into three blocks by means of pillars with half columns and arches. One highlight is the apse, surrounded by eight slender columns of green stone. The nave opens into two side chapels at the north and south, each containing a small niche, which used to contain an altar and a pillar at either side. The upper church walls and ceiling display wall paintings of exceptional quality, from the original building around 1130. Together with the architecture, they contribute to a 'work of art' of international class.

Since the fifteenth century, the original paintwork has been covered over by several layers of whitewash, and remains in this condition today. The wall paintings were rediscovered at the end of the 19th Century, but were not fully uncovered until 1930-34. Since then many extensive conservation activities have been necessary. Today the church is air conditioned in order to minimize fluctuations in the level of humidity. This serves as a stabilizer of the salt contained in the layers of paintwork.

Historic wall paintings are valuable cultural and historic artefacts. They give the modern viewer an insight into life in the Middle Ages. In Idensen, Bishop Sigward ordered an extensive series of paintings by unknown artists: In the nave, scenes from the Old and New Testaments are portrayed opposite each other, with pictures of theological content. 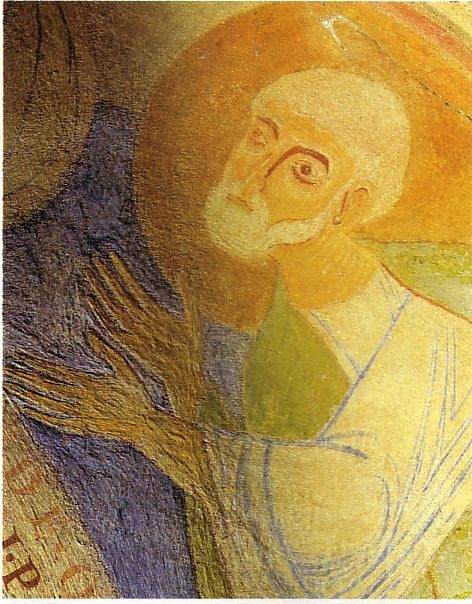 The first pair shows the Baptism and Noah's Arc. They are connected with the common theme 'water'. In both scenes, water has a devastating and preserving / purifying power. The second pair shows the Tower of Babel opposite the Coming of the Holy Spirit at Pentecost. Both pictures are concerned with language: Because mankind wants to be like God, he mixes up their language(s); but because he wants peace on Earth, he gives the Holy Spirit, which enables understanding beyond the bounds of language. In the third pair, the scene of the Final Judgement is clearly recognizable. On the Old Testament side, this is set against the story of Sodom and Gomorrha. Here the topic is the separation of the Just from the Unjust, the Righteous from the Condemned. The three pairs are set against the representation of the 'Majestas Domini' (God as Ruler of the World) in the apse, which forms the link between all the images.